“The Exploding Success of Skyview” – A Radio Ink Cover Story

For the December cover of Radio Ink Magazine, we were honored to have an opportunity to share the Skyview story 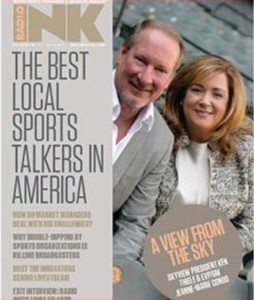 and the success we have had over the last 22 years. Editor-in-Chief, Ed Ryan, sat down with Skyview Networks’ President, Ken Thiele, and EVP/GM, Jeanne-Marie Condo, to discuss how Skyview came to be, the partnerships we have had the pleasure of building, and what’s next for us.

Skyview Networks was launched by Ken Thiele and Dave Chamberlain during the 1995-1996 NBA season. Working in conjunction with longtime Phoenix Suns broadcaster Al McCoy, the goal was to get the games broadcast to markets outside Phoenix. They’ve come a long way since that idea was launched over 20 years ago.

McCoy was distributing the games via phone coupler and wanted someone to help him with satellite distribution. Thiele and Chamberlain had just sold their traffic company to Metro Networks. They didn’t know much about satellite delivery, but set out to learn everything they could to address McCoy’s needs. Sixty days later, they were delivering a Suns game via satellite uplink.”