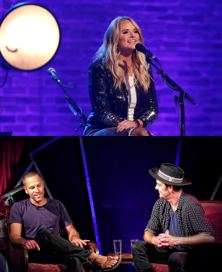 “’Front and Center’ and “Speakeasy” have both set a high bar for insightful, entertaining and engaging music programming,” said Executive Producer of Front and Center, Don Maggi. “We felt that, beyond just television, these shows would thrive on radio. These performances, from some of music’s best known and biggest artists on “Front and Center,” along with the compelling and fun conversations on “Speakeasy,” create a perfect fit for radio.”

“The Speakeasy Sessions” will bring unique conversations, stories and insights from some of the most recognizable icons of rock and roll including Joe Elliott, Roger Waters, John Mellencamp, Billy Gibbons and Geddy Lee. The show features a unique format where artists are interviewed by a person of their choosing, creating intimate, revealing moments.

“We are excited to work with today’s greatest performers in country and classic rock music,” said Steve Jones, Vice President and General Manager of ABC Radio. “We’re taking a wealth of content and weaving it into fast-paced radio programming that features great music and riveting behind the scenes stories and never before shared anecdotes from some of the biggest country and rock stars.”

Each month, affiliates will receive one two-hour program with music performances and daily thirty-second vignettes of never released interview material.

“These shows are a perfect strategic asset for association with the biggest performers in music,” said Jeanne-Marie Condo, Executive Vice President and General Manager, Skyview Networks.

For affiliation information, contact Heidi Oringer at 212.456.5541 or heidi.b.oringer@abc.com.

About Front and Center Entertainment